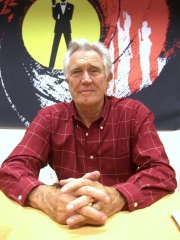 George Robert Lazenby (; born 5 September 1939) is an Australian actor, martial artist and former model. He is known for playing the fictional British secret agent James Bond in the Eon Productions film series, playing the character in On Her Majesty's Secret Service (1969). Lazenby's tenure as Bond was the shortest among the actors in the official film series and he is the series' only Bond actor to appear in just one film. Beginning his professional career as a model, Lazenby had no prior film experience and had only acted in commercials when he was cast by producer Albert R. Read more on Wikipedia

Since 2007, the English Wikipedia page of George Lazenby has received more than 4,468,621 page views. His biography is available in 44 different languages on Wikipedia making him the 215th most popular actor.