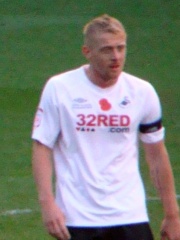 Garry Alan Monk (born 6 March 1979) is an English football manager and former professional player who played as a centre back, and was most recently the manager of Championship club Sheffield Wednesday. His managerial career includes spells at Swansea City, Leeds United, Middlesbrough and Birmingham City. Monk played for Swansea City in all four divisions of professional football from 2004 to 2014, for the majority of that time as captain. Read more on Wikipedia

Among coaches, Garry Monk ranks 323 out of 329. Before him are Paul Clement, Per Frandsen, Darren Ferguson, Ian Holloway, Yang Pu, and Gustavo Morínigo. After him are Nigel Adkins, Luís dos Reis, Fred Hoiberg, Malky Mackay, Luizinho Vieira, and Alex Neil.