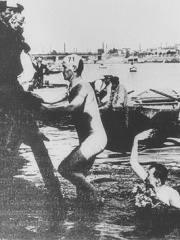 Frederick Claude Vivian Lane (2 February 1880 – 14 May 1969) was an Australian swimmer who competed at the 1900 Summer Olympics.Lane, from Manly, New South Wales, was four years old when his brother saved him from drowning in Sydney Harbour, whereupon he decided to learn to swim. Later, he attended high school at Saint Ignatius' College, Riverview.After breaking many Australasian swimming records, Lane moved to England to compete in the English Championships in 1899.He was the first Australian to represent his country in swimming at the Olympic Games, when he competed at the 1900 Summer Olympics in Paris, and won two gold medals. He first won the 200 metres freestyle, clearly beating Hungarian Zoltán Halmay. Read more on Wikipedia

Since 2007, the English Wikipedia page of Frederick Lane has received more than 22,138 page views. His biography is available in 18 different languages on Wikipedia making him the 24th most popular swimmer.

Among SWIMMERS In Australia