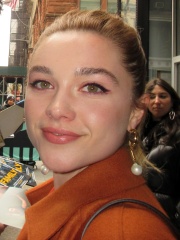 Florence Pugh ( PEW; born 3 January 1996) is an English actress. She made her acting debut in the mystery film The Falling (2014) and gained recognition for her leading role as an unhappily married woman in the independent drama Lady Macbeth (2016). Her performance in the latter won her the BIFA Award for Best Actress. Read more on Wikipedia

Since 2007, the English Wikipedia page of Florence Pugh has received more than 7,079,600 page views. Her biography is available in 20 different languages on Wikipedia making her the 8,237th most popular actor.