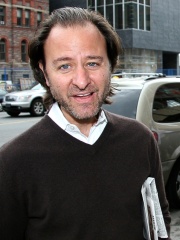 Fisher Stevens (born Steven Fisher; November 27, 1963) is an American actor, director, producer and writer. As an actor, he is best known for his portrayals of Ben Jabituya in Short Circuit (renamed "Ben Jahveri" in the sequel), Chuck Fishman on the 1990s television series Early Edition, and villainous computer genius Eugene "The Plague" Belford in Hackers. His most recent successes include the 2010 Academy Award for Best Documentary Feature for his film The Cove and the 2008 Independent Spirit Award for Best Documentary Feature for his film Crazy Love. Read more on Wikipedia

Since 2007, the English Wikipedia page of Fisher Stevens has received more than 2,048,503 page views. His biography is available in 24 different languages on Wikipedia making him the 4,777th most popular actor.