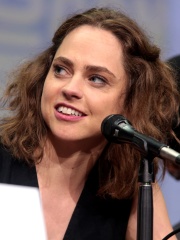 Fiona Christianne Dourif (born October 30, 1981) is an American actress and producer. She is known for her role as Bart Curlish in BBC America's Dirk Gently's Holistic Detective Agency and as the young Diane Jones in Dustin Lance Black's When We Rise. She has appeared in Showtime's Shameless, in a recurring role on NBC's The Blacklist, and Nica Pierce in the 2013 horror film Curse of Chucky, Cult of Chucky, and the television series Chucky, which are part of the Child's Play franchise; she appears in these films alongside her father, Brad Dourif, who portrays the series' main antagonist, Chucky. Read more on Wikipedia