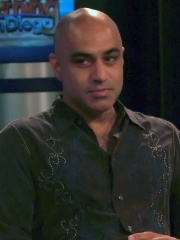 Faran Haroon Tahir (born February 16, 1963) is an Pakistani-American actor who appears in American television series and films, best known for his roles as Raza in Iron Man and Captain Robau in Star Trek. Read more on Wikipedia

Since 2007, the English Wikipedia page of Faran Tahir has received more than 736,276 page views. His biography is available in 15 different languages on Wikipedia making him the 5,963rd most popular actor.