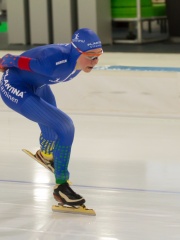 Esmee Visser (Dutch pronunciation: [ɛsˈmeː ˈvɪsər]; born 26 January 1996) is a Dutch speed skater who specialises in long distances. Born in Leiden, she qualified for the 5000 metres at the 2018 Winter Olympics in December 2017. At the 2018 European Speed Skating Championships, she won the 3000 metres in her second-ever international race. Read more on Wikipedia

Among skaters, Esmee Visser ranks 311 out of 313. Before her are Ayaka Kikuchi, Antoinette de Jong, Keiichiro Nagashima, Chris Witty, Gracie Gold, and Gabrielle Daleman. After her are Karolína Erbanová, Kim A-lang, Shaoang Liu, and Ayano Sato.

Among SKATERS In Netherlands