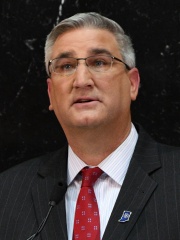 Eric Joseph Holcomb (born May 2, 1968) is an American politician serving as the 51st and current governor of Indiana since 2017. A member of the Republican Party, he served as the 51st lieutenant governor of Indiana from 2016 to 2017 under Governor Mike Pence, now the 48th Vice President of the United States. Holcomb was nominated to fill the remainder of Lieutenant Governor Sue Ellspermann's term after she resigned on March 2, 2016, to become President of Ivy Tech Community College. He won the 2016 election for governor of Indiana over Democratic nominee John R. Read more on Wikipedia

Since 2007, the English Wikipedia page of Eric Holcomb has received more than 802,187 page views. Her biography is available in 16 different languages on Wikipedia making her the 14,346th most popular politician.