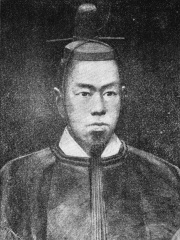 Emperor Kōmei (孝明天皇, Kōmei-tennō, 22 July 1831 – 30 January 1867) was the 121st Emperor of Japan, according to the traditional order of succession. Kōmei's reign spanned the years from 1846 through 1867, corresponding to the final years of the Edo period.During his reign there was much internal turmoil as a result of Japan's first major contact with the United States, which occurred under Commodore Perry in 1853 and 1854, and the subsequent forced re-opening of Japan to western nations, ending a 220-year period of national seclusion. Emperor Kōmei did not care much for anything foreign, and he opposed opening Japan to Western powers. Read more on Wikipedia

Emperor Kōmei was most famous for being the emperor of Japan during the Meiji Restoration. He was the emperor during the time when Japan went from being a feudal society to a modernized nation.

Among politicians, Emperor Kōmei ranks 1,309 out of 15,710. Before him are Stephen, King of England, Zog I of Albania, Publius Cornelius Scipio, Wenceslaus III of Bohemia, Khosrow II, and Crazy Horse. After him are Baldwin V of Jerusalem, Alaric II, John VII Palaiologos, Minamoto no Yoritomo, Sogdianus of Persia, and Gaspard II de Coligny.