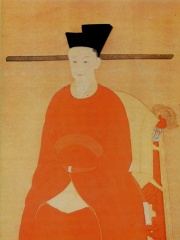 Emperor Duzong of Song (2 May 1240 – 12 August 1274), personal name Zhao Qi, was the 15th emperor of the Song dynasty in China and the sixth emperor of the Southern Song dynasty. He was a nephew of his predecessor, Emperor Lizong, and reigned from 1264 until his death in 1274. His birth name was Zhao Mengqi but his name was changed to Zhao Zi in 1251 and finally to Zhao Qi in 1253 after he was designated as Emperor Lizong's heir apparent. Read more on Wikipedia

Since 2007, the English Wikipedia page of Emperor Duzong has received more than 63,389 page views. His biography is available in 26 different languages on Wikipedia making him the 3,616th most popular politician.

Among politicians, Emperor Duzong ranks 3,593 out of 14,801. Before him are Memnon, Princess Louise of Prussia, Birger, King of Sweden, Alexander II of Scotland, Francesco Morosini, and Tiberius Sempronius Gracchus. After him are Princess Charlotte, Duchess of Valentinois, Timoleon, Empress Jingū, Shapur III, Callias II, and Taejodae of Goguryeo.

Among people born in 1240, Emperor Duzong ranks 10. Before him are Arnaldus de Villa Nova, Arnolfo di Cambio, Abraham Abulafia, Magnus III of Sweden, Henry VI, Count of Luxembourg, and Pietro Cavallini. After him are Siger of Brabant, Petrus Peregrinus de Maricourt, Albert II, Margrave of Meissen, Jean de Meun, Konstantin Tih, and Daumantas of Pskov. Among people deceased in 1274, Emperor Duzong ranks 5. Before him are Thomas Aquinas, Bonaventure, Nasir al-Din al-Tusi, and Henry I of Navarre. After him are Robert de Sorbon and Prince Munetaka.