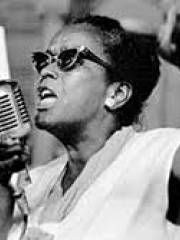 Ella Josephine Baker (December 13, 1903 – December 13, 1986) was an African-American civil rights and human rights activist. She was a largely behind-the-scenes organizer whose career spanned more than five decades. In New York City and the South, she worked alongside some of the most noted civil rights leaders of the 20th century, including W. E. B. Du Bois, Thurgood Marshall, A. Philip Randolph, and Martin Luther King Jr. Read more on Wikipedia

Since 2007, the English Wikipedia page of Ella Baker has received more than 588,051 page views. Her biography is available in 17 different languages on Wikipedia making her the 378th most popular social activist.