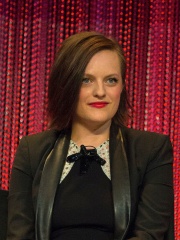 Elisabeth Singleton Moss (born July 24, 1982) is an American actor. She is known for her work in several television dramas, earning such accolades as two Primetime Emmy Awards and two Golden Globe Awards, which led Vulture to name her the "Queen of Peak TV".Moss began acting in the early 1990s and first gained recognition for playing Zoey Bartlet, the youngest daughter of President Josiah Bartlet, in the NBC political drama series The West Wing (1999–2006). Wider recognition came for playing Peggy Olson, a secretary-turned-copywriter, in the AMC period drama series Mad Men (2007–2015). Read more on Wikipedia

Since 2007, the English Wikipedia page of Elisabeth Moss has received more than 12,296,139 page views. Her biography is available in 37 different languages on Wikipedia making her the 4,290th most popular actor.