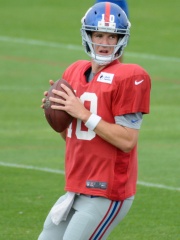 Elisha Nelson Manning IV (born January 3, 1981) is a former American football quarterback who played in the National Football League (NFL) for 16 seasons with the New York Giants. After playing college football at the University of Mississippi, he was selected as the first overall pick in the 2004 NFL Draft by the San Diego Chargers and traded to the Giants during the draft. He is the youngest son of former NFL quarterback Archie Manning and younger brother of former NFL quarterback Peyton Manning. Although Manning struggled with consistency throughout much of his career, he is recognized for twice leading the Giants to underdog Super Bowl victories against the New England Patriots' dynasty in Super Bowl XLII and Super Bowl XLVI. Read more on Wikipedia

Since 2007, the English Wikipedia page of Eli Manning has received more than 9,741,800 page views. His biography is available in 23 different languages on Wikipedia making him the 19th most popular american football player.