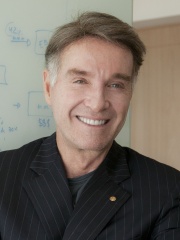 Eike Fuhrken Batista da Silva (Brazilian Portuguese: [ˈajk(i) ˈfuʁkẽj bɐˈtʃistɐ dɐ ˈsiwvɐ]; born 3 November 1956) is a Brazilian-German serial entrepreneur who made and lost a fortune in mining and oil and gas industries. He engaged in a quest to promote Brazil's infrastructure with large-scale projects, such as the Porto do Açu, which eventually bankrupted his companies. He was chairman of Brazilian conglomerate EBX Group, which was formerly the parent company of five companies traded on the BOVESPA's Novo Mercado, a special segment of the São Paulo stock market. Read more on Wikipedia

Since 2007, the English Wikipedia page of Eike Batista has received more than 466,886 page views. His biography is available in 15 different languages on Wikipedia making him the 303rd most popular businessperson.