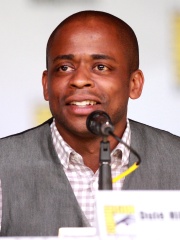 Karim Dulé Hill (; born May 3, 1975) is an American actor and tap dancer. He played personal presidential aide and Deputy Special Assistant to the Chief of Staff, Charlie Young, on the NBC drama television series The West Wing, for which he received an Emmy nomination Outstanding Supporting Actor in a Drama Series, and pharmaceutical salesman-private detective Burton "Gus" Guster on the USA Network television comedy-drama Psych. He also had minor roles in the movies The Guardian, Holes and She's All That and a recurring role on Ballers. Read more on Wikipedia

Since 2007, the English Wikipedia page of Dulé Hill has received more than 3,159,032 page views. His biography is available in 22 different languages on Wikipedia making him the 6,625th most popular actor.