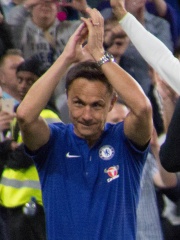 Dennis Frank Wise (born 16 December 1966) is an English former professional footballer and manager, who played as a central midfielder. He is best known for having spent the majority of his career at Chelsea, from 1990 to 2001. Beginning his career at Wimbledon, Wise came to prominence as a member of the "Crazy Gang", and in 1988, was part of the team that won the FA Cup in an upset victory over Liverpool. Read more on Wikipedia

Since 2007, the English Wikipedia page of Dennis Wise has received more than 1,634,927 page views. His biography is available in 25 different languages on Wikipedia making him the 4,946th most popular soccer player.