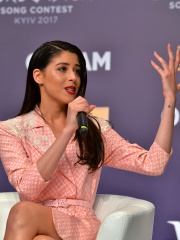 Dimitra Papadea (Greek: Δήμητρα Παπαδέα, Greek pronunciation: [ˈðimitra papaˈðea], born 21 August 1991), known professionally as Demy, is a Greek singer. She is signed with the Greek independent label Panik Records. She has released two studio albums, "#1" in 2012, which became platinum and "Rodino Oniro" in 2014, which became gold. Read more on Wikipedia

Page views of Demies by language

Among singers, Demy ranks 2,943 out of 3,541. Before her are Phife Dawg, Aleyna Tilki, Woo Hye-rim, Asuka Fukuda, Boggie, and Martine McCutcheon. After her are Vance Joy, Ramón, Lior Narkis, Atiye, N, and Heather Headley.