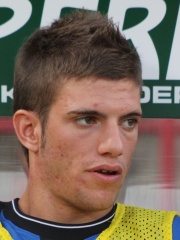 Davide Santon (Italian pronunciation: [ˈdaːvide sanˈton]; born 2 January 1991) is an Italian professional footballer who plays as a left back for Italian club Roma. A former Inter Milan youth product, Santon began his professional club career with Inter in 2008, and remained with the club until 2011, aside from a spell on loan with Cesena. He later had a spell with English club Newcastle United, before returning to Inter in 2015. Read more on Wikipedia

Since 2007, the English Wikipedia page of Davide Santon has received more than 620,996 page views. His biography is available in 33 different languages on Wikipedia making him the 4,902nd most popular soccer player.