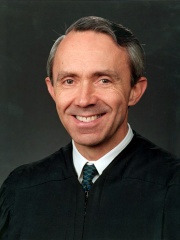 David Hackett Souter (; born September 17, 1939) is a retired Associate Justice of the Supreme Court of the United States. He served from October 1990 until his retirement in June 2009. Appointed by President George H. W. Bush to fill the seat vacated by William J. Read more on Wikipedia

Since 2007, the English Wikipedia page of David Souter has received more than 1,540,051 page views. His biography is available in 16 different languages on Wikipedia making him the 20th most popular judge.

Among judges, David Souter ranks 28 out of 23. Before him are Walter Q. Gresham, Carlo Biotti, Warren E. Burger, Elliott Belgrave, Brett Kavanaugh, and Elena Kagan. After him are Neil Gorsuch and Michael Mukasey.