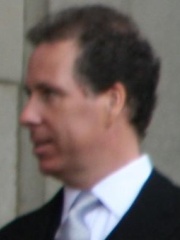 David Albert Charles Armstrong-Jones, 2nd Earl of Snowdon (born 3 November 1961), styled as Viscount Linley until 2017 and known professionally as David Linley, is an English furniture maker, a former chairman of the auction house Christie's UK, and nephew of Queen Elizabeth II. The son of Princess Margaret and Antony Armstrong-Jones, 1st Earl of Snowdon, he is, as of March 2021, 23rd in the line of succession to the British throne and the first person who is not a descendant of the Queen. Read more on Wikipedia

Among politicians, David Armstrong-Jones, 2nd Earl of Snowdon ranks 8,554 out of 15,710. Before him are Eudokia Ingerina, Henry Howard, Earl of Surrey, Lazar Mojsov, Yohannes IV, Friedrich, Prince of Waldeck and Pyrmont, and Petre Roman. After him are Francisco de Sá Carneiro, Ross Perot, Frederick, Duke of Bavaria, Bohemond V of Antioch, Max Erwin von Scheubner-Richter, and Isabella of Valois, Duchess of Bourbon.