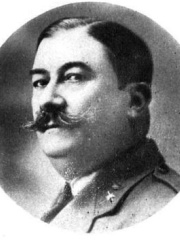 Dámaso Berenguer y Fusté, 1st Count of Xauen (4 August 1873 – 19 May 1953) was a Spanish soldier and politician, who served at the 64th Prime Minister of Spain. Berenguer was born in San Juan de los Remedios, Cuba, while that island was still a Spanish administrative division. He enlisted in the army in 1889, served in Cuba and Morocco, and was promoted to general in 1909. In 1918, he was appointed Minister of War under Prime Minister Manuel García Prieto. Read more on Wikipedia

Since 2007, the English Wikipedia page of Dámaso Berenguer has received more than 48,971 page views. His biography is available in 17 different languages on Wikipedia making him the 8,806th most popular politician.

Among politicians, Dámaso Berenguer ranks 8,760 out of 14,801. Before him are Histiaeus, Ashur-bel-kala, Albert II, Duke of Bavaria, Adib Shishakli, Mahendra of Nepal, and Princess Augusta Sophia of the United Kingdom. After him are Jakaya Kikwete, Taur Matan Ruak, Jiong of Xia, Shamshi-Adad IV, Apolinario Mabini, and Infanta Maria of Guimarães.