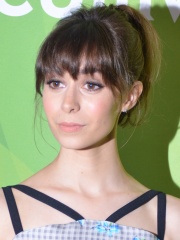 Cristin Milioti (born August 16, 1985) is an American actress and singer. She is best known for playing the titular Mother on the sitcom How I Met Your Mother from 2013 to 2014, and for her work in theater productions such as That Face, Stunning, and the Tony Award-winning musical Once, for which she won a Grammy Award and was nominated for a Tony Award. Read more on Wikipedia

Since 2007, the English Wikipedia page of Cristin Milioti has received more than 4,671,959 page views. Her biography is available in 32 different languages on Wikipedia making her the 5,272nd most popular actor.

Rolling Stone
Cristin Milioti Is Ready for Her Reset
A candid conversation with the 'Palm Springs' star on endless days, existential funks, pirate hooks, Michael Keaton, and the art of 'dealing with your shit'
David Fear
Collider.com
‘Palm Springs’: Cristin Milioti Hopes the Hulu Comedy Makes You “Sit With Your Shit”
'Palm Springs' star Cristin Milioti on the Hulu movie's ending, the big scene that got cut, and why she wants a sequel to 'Black Mirror: USS Callister.'
Liz Shannon Miller
LaineyGossip
Review: Palm Springs starring Andy Samberg and Cristin Milioti is a wacky existential rom-com for our times
SPOILERSStanley Kubrick once said, “However vast the darkness, we must supply our own light.” Palm Springs is a film concerned with that supply of light, and how we find meaning when life seems meaningless and every day the same. Directed by Max Barbakow, mak…
Sarah