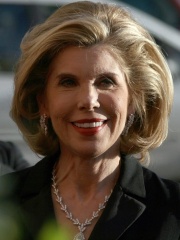 Christine Jane Baranski (born May 2, 1952) is an American actress, singer, and producer. She is a 15-time Emmy Award nominee, winning once in 1995 for Outstanding Supporting Actress in a Comedy Series for her role as Maryann Thorpe in the sitcom Cybill (1995–98). Baranski has received further critical acclaim for her performance as Diane Lockhart in the legal drama series The Good Wife (2009–16) and its spinoff series The Good Fight (2017–present), as well as her recurring role as Dr. Read more on Wikipedia

Since 2007, the English Wikipedia page of Christine Baranski has received more than 6,807,487 page views. Her biography is available in 37 different languages on Wikipedia making her the 810th most popular actor.