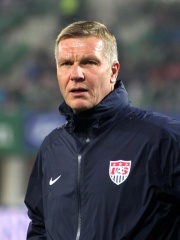 Christopher Charles Eric Woods (born 14 November 1959) is a former England international football goalkeeper. He played in the Football League and Premier League for Nottingham Forest, Queens Park Rangers, Norwich City, Sheffield Wednesday, Reading, Southampton and Burnley. He also played in the Scottish Football League for Rangers and in Major League Soccer for the Colorado Rapids.Woods was Peter Shilton's long-time understudy in the England team in the mid to late 1980s, finally claiming the number one shirt for himself in the early 1990s. Read more on Wikipedia

Since 2007, the English Wikipedia page of Chris Woods has received more than 281,045 page views. His biography is available in 19 different languages on Wikipedia making him the 6,357th most popular soccer player.