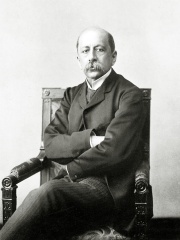 Charilaos Trikoupis (Greek: Χαρίλαος Τρικούπης; July 11, 1832 – March 30, 1896) was a Greek politician who served as a Prime Minister of Greece seven times from 1875 until 1895. He is best remembered for introducing the motion of no confidence to the Greek constitution, proposing and funding such ambitious and modern projects as the construction of the Corinth Canal, but also eventually leading the country to bankruptcy. Read more on Wikipedia

Since 2007, the English Wikipedia page of Charilaos Trikoupis has received more than 57,627 page views. His biography is available in 23 different languages on Wikipedia making him the 9,129th most popular politician.

Among politicians, Charilaos Trikoupis ranks 9,082 out of 14,801. Before him are Elizabeth Warren, Masaharu Homma, Ken Livingstone, Zara Yaqob, Zdeněk Fierlinger, and Valentín Gómez Farías. After him are Alejandro Agustín Lanusse, Constantine III of Scotland, Ada, Countess of Holland, Andranik Margaryan, Dedumose I, and Johann Schneider-Ammann.