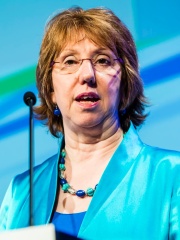 Catherine Margaret Ashton, Baroness Ashton of Upholland, (born 20 March 1956), is a British Labour politician who served as the High Representative of the Union for Foreign Affairs and Security Policy and First Vice President of the European Commission in the Barroso Commission from 2009 to 2014. Her political career began in 1999 when she was created a Life Peer as Baroness Ashton of Upholland, of St Albans in the County of Hertfordshire, by Tony Blair's Labour Government. She became the Parliamentary Under-Secretary of State in the Department for Education and Skills in 2001 and subsequently in the Ministry of Justice in 2004. Read more on Wikipedia

Among politicians, Catherine Ashton ranks 7,159 out of 15,710. Before her are Blanche of Navarre, Countess of Champagne, Ulaghchi, Ahmose-Meritamun, Hiranuma Kiichirō, Princess Mathilde Caroline of Bavaria, and Mahidol Adulyadej. After her are Conrad I, Count of Auxerre, George Macartney, 1st Earl Macartney, Laelianus, Iullus Antonius, Marina Ginestà, and Fradique de Menezes.