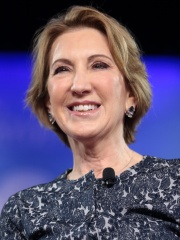 Cara Carleton "Carly" Fiorina (née Sneed; born September 6, 1954) is an American businesswoman and political figure, known primarily for her tenure as CEO of Hewlett-Packard (HP). As chief executive officer of HP from 1999 to 2005, Fiorina was the first woman to lead a Top-20 company as ranked by Fortune Magazine.In 2002, Fiorina oversaw what was then the largest technology sector merger in history, in which HP acquired rival personal computer manufacturer, Compaq. The transaction made HP the world's largest seller of personal computers. HP subsequently laid off 30,000 U.S. Read more on Wikipedia