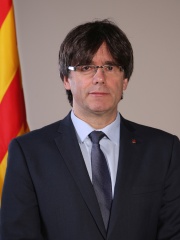 Carles Puigdemont i Casamajó (Catalan pronunciation: [ˈkaɾləs ˌpudʒðəˈmon i ˌkazəməˈʒo]; born 29 December 1962) is a Catalan politician and journalist from Spain. Since 2019 he has served as a Member of the European Parliament (MEP). A former mayor of Girona, Puigdemont served as President of Catalonia from 2016 to 2017 when he was removed from office by the Spanish Government following the unilateral Catalan declaration of independence. Read more on Wikipedia

Carles Puigdemont is the current president of Catalonia, a region in northeastern Spain. He was elected president in January 2016, and his term is expected to end in 2020.

Among politicians, Carles Puigdemont ranks 18,755 out of 15,577. Before him are CGP Grey, Alex Danson, Laura Unsworth, Rupinder Pal Singh, Tess Coady, and Georgie Twigg. After him are Mamady Doumbouya, Hasan Akhund, Najla Bouden, and Robert A. Lovett.