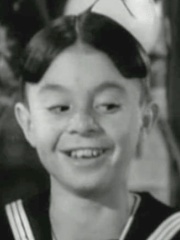 Carl Dean Switzer (August 7, 1927 – January 21, 1959) was an American singer, child actor, dog breeder and guide. He was best known for his role as Alfalfa in the short subjects series Our Gang. Switzer began his career as a child actor in the mid-1930s appearing in the Our Gang short subjects series as "Alfalfa", one of the series' most popular and best-remembered characters. Read more on Wikipedia

Since 2007, the English Wikipedia page of Carl Switzer has received more than 2,117,406 page views. His biography is available in 15 different languages on Wikipedia making him the 3,059th most popular actor.