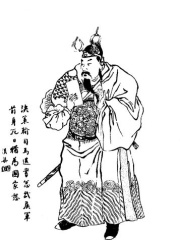 Cao Zhen (died April or May 231), courtesy name Zidan, was a military general of the state of Cao Wei during the Three Kingdoms period of China. He was an adopted son of Cao Cao, a warlord who rose to power in the late Eastern Han dynasty and laid the foundation for Wei. After Cao Cao's death and the end of the Eastern Han dynasty, Cao Zhen served under Cao Pi and Cao Rui, the first two emperors of Wei. Read more on Wikipedia

Since 2007, the English Wikipedia page of Cao Zhen has received more than 96,973 page views. His biography is available in 15 different languages on Wikipedia. Cao Zhen is the 417th most popular military personnel (down from 414th in 2019).

Cao Zhen was a military general who served under the Jin Dynasty. He is most famous for his victory over the invading Xiongnu tribes in the Battle of Yanmen Pass.

Among people born in 185, Cao Zhen ranks 2. Before him is Origen.