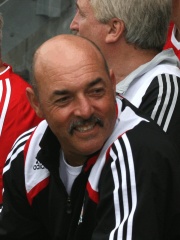 Bruce David Grobbelaar (born 6 October 1957) is a Zimbabwean former professional footballer who played as a goalkeeper, most prominently for English team Liverpool between 1981 and 1994, and for the Zimbabwean national team. He is remembered for his gymnastic-like athletic ability, unflappable confidence and eccentric and flamboyant style of play. He has been the goalkeeper coach for Ottawa Fury FC of the North American Soccer League since 2014. Read more on Wikipedia

Since 2007, the English Wikipedia page of Bruce Grobbelaar has received more than 991,659 page views. His biography is available in 20 different languages on Wikipedia making him the 2,185th most popular soccer player.

Among SOCCER PLAYERS In South Africa