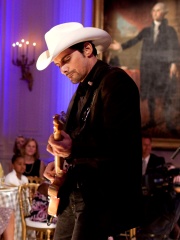 Bradly Douglas Paisley (born October 28, 1972) is an American country music singer and songwriter. Starting with his 1999 debut album Who Needs Pictures, he has released eleven studio albums and a Christmas compilation on the Arista Nashville label, with all of his albums certified Gold or higher by the RIAA. He has scored 35 Top 10 singles on the US Billboard Country Airplay chart, 20 of which have reached number one. Read more on Wikipedia

Among singers, Brad Paisley ranks 2,442 out of 3,541. Before him are Kurt Elling, Gabriella Cilmi, MakSim, Blas Cantó, Ziynet Sali, and Deen. After him are Serafín Zubiri, Alf Poier, Margaret Berger, Aisel, Nate Ruess, and Josh Ritter.