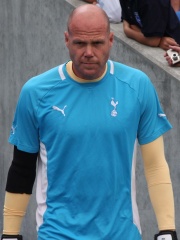 Bradley Howard Friedel (born May 18, 1971) is a retired American soccer goalkeeper and the former head coach of Major League Soccer team New England Revolution.Friedel played 84 games for the United States national team between 1992 and 2005, and represented his country at three FIFA World Cup tournaments. He is the current holder of the Premier League record for most consecutive appearances with 310, a feat he achieved during spells at Blackburn Rovers, Aston Villa and Tottenham Hotspur. Read more on Wikipedia

Since 2007, the English Wikipedia page of Brad Friedel has received more than 996,225 page views. His biography is available in 39 different languages on Wikipedia making him the 3,252nd most popular soccer player.