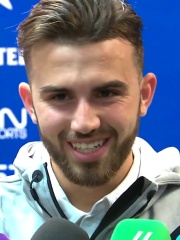 Borja Mayoral Moya (Spanish pronunciation: [ˈboɾxa maʝoˈɾal]; born 5 April 1997) is a Spanish professional footballer who plays as a striker for La Liga club Getafe. Formed at Real Madrid from the age of 10, he made his first-team debut in 2015 after featuring for the reserves in Segunda División B. He was also loaned to Levante and Getafe in La Liga, VfL Wolfsburg in the Bundesliga, and Roma in Serie A. Mayoral represented Spain up to under-21 level, earning 48 caps and scoring 29 goals. Read more on Wikipedia