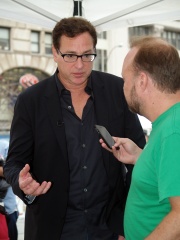 GMA
Kelly Rizzo remembers late husband Bob Saget during 'GMA' interview
Kelly Rizzo is speaking out about her husband Bob Saget's sudden passing and his lasting impact on the world.
Cleopatra Andreadis, Hayley FitzPatrick, Dominick Proto, Ashley Riegle
USA Today
Kelly Rizzo remembers late husband Bob Saget in tearful interview: 'No one will ever be like Bob'
Kelly Rizzo says "every second is horrible" while dealing with the loss of husband Bob Saget, but the love from friends has been a "silver lining."
USA TODAY, Elise Brisco, USA TODAY
The A.V. Club
How I Met Your Father pays tribute to HIMYM narrator Bob Saget in first episode
Hulu’s How I Met Your Mother spin-off How I Met Your Father pays tribute to the original show’s narrator, Bob Saget. The first two episodes premiered on Tuesday, January 18, and viewers may have noticed that the first episode ended with a title card that says…
Tatiana Tenreyro
/FILM
How I Met Your Father Pays Loving Tribute To Bob Saget
The entertainment world was shocked earlier this month when "Full House" star, "America's Funniest Home Videos" host, and beloved comedian Bob Saget passed away. Since his death, many heartwarming tributes have been shared by his friends, family, co-stars, an…
Ben F. Silverio