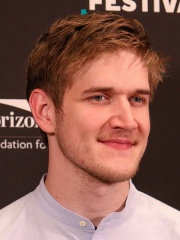 Robert Pickering "Bo" Burnham (born August 21, 1990) is an American comedian, musician, actor, film director, screenwriter, and poet. He began his career on YouTube in March 2006, with his videos gaining more than 300 million views as of March 2021.Burnham signed a four-year record deal with Comedy Central Records and released his debut EP, Bo fo Sho, in 2008. His first full-length album, Bo Burnham, was released the following year. Read more on Wikipedia

TheWrap
Bo Burnham Crashes the Emmy Race With Netflix Special ‘Inside’
On May 30, actor, writer and director Bo Burnham launched a surprise sneak attack on a category that’s already one of the most competitive at this year’s Emmy Awards. That day, Netflix dropped “Bo Burnham Inside,” a comedy and music special that dissected lif…
Steve Pond

Among comedians, Bo Burnham ranks 91 out of 90. Before her are Aziz Ansari, Kenan Thompson, Chelsea Handler, Mitch Hedberg, Ralphie May, and Carrie Brownstein.