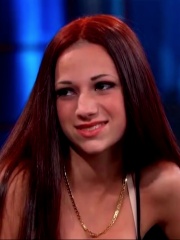 Danielle Peskowitz Bregoli (born March 26, 2003), known professionally as Bhad Bhabie (, "bad baby"), is an American rapper, songwriter, and internet personality. She first became known from an episode of Dr. Phil in September 2016, in which she said the phrase, "Catch me outside, how about that?", which became a viral video meme and catchphrase. Read more on Wikipedia

HotNewHipHop
Bhad Bhabie Is Livid Dr. Phil Claims He Had No Idea About Turn-About Ranch Policies
She claims her mother signed a consent form that stated his show would receive updates about the teens.https://www.hotnewhiphop.com/bhad-bhabie-is-livid-dr-phil-claims-he-had-no-idea-about-turn-about-ranch-policies-news.129853.html
Erika Marie
Newsweek
Bhad Bhabie Calls out Dr. Phil for Distancing Himself From Turn-About Ranch Allegations: 'Sexual Abuse, Murder, Torture'
Bhad Bhabie alleged that she and other teens were subject to traumatizing experiences, including sleep deprivation, sexual abuse and witnessing a murder, while at the ranch promoted by Dr. Phil.
Natalie Colarossi
PerezHilton.com
Is Bhad Bhabie Corrupting The Youth Of America? | Perez Hilton
Bhad Bhabie’s impact will be felt in years to come with young women. Good or bad? This and much more on our latest podcast! Listen to The Perez Hilton Podcast with Chris Booker on Apple Podcasts or Spotify or directly at http://PerezPodcast.com [...] Read Mor…
M.B.