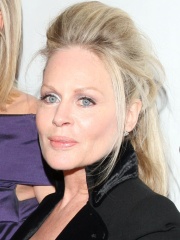 Beverly Heather D'Angelo (born November 15, 1951) is an American actress and singer who starred as Ellen Griswold in the National Lampoon's Vacation films (1983–2015). She has appeared in over 60 films and was nominated for a Golden Globe Award for her role as Patsy Cline in Coal Miner's Daughter (1980), and for an Emmy Award for her role as Stella Kowalski in the TV film A Streetcar Named Desire (1984). D'Angelo's other film roles include Sheila Franklin in Hair (1979) and Doris Vinyard in American History X (1998). Read more on Wikipedia

Since 2007, the English Wikipedia page of Beverly D'Angelo has received more than 6,475,506 page views. Her biography is available in 26 different languages on Wikipedia making her the 1,605th most popular actor.