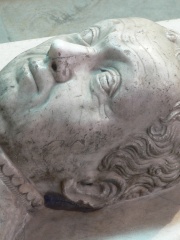 Bertrand du Guesclin (Breton: Beltram Gwesklin; c. 1320 – 13 July 1380), nicknamed "The Eagle of Brittany" or "The Black Dog of Brocéliande", was a Breton knight and an important military commander on the French side during the Hundred Years' War. From 1370 to his death, he was Constable of France for King Charles V. Read more on Wikipedia

Bertrand du guesclin is most famous for his military conquests in France.

Among people born in 1320, Bertrand du Guesclin ranks 4. Before him are Valdemar IV of Denmark, Peter I of Portugal, and Toghon Temür. After him are Vukašin of Serbia, Blanche of Namur, John Hawkwood, Beatrice of Bourbon, Queen of Bohemia, Galeazzo II Visconti, Cápac Yupanqui, Ragibagh Khan, and Louis I of Naples. Among people deceased in 1380, Bertrand du Guesclin ranks 4. Before him are Catherine of Siena, Charles V of France, and Haakon VI of Norway. After him are Mamai, Elizabeth of Poland, Queen of Hungary, Inca Roca, Emperor Kōmyō, Manuel Kantakouzenos, and Theodoric of Prague.