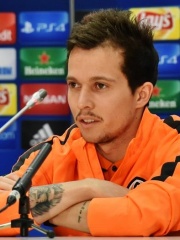 Bernard Anício Caldeira Duarte (born 8 September 1992), better known as Bernard (Brazilian Portuguese: [bɛʁˈnaʁ]) and Bernard Duarte, is a Brazilian professional footballer who plays for Super League Greece club Panathinaikos. A left-sided player, he is known for his pace and energy.Born in Belo Horizonte, Bernard began his professional career with hometown club Atlético Mineiro, where he won the 2013 Copa Libertadores. He then moved for a reported €25 million fee to Shakhtar Donetsk, where he won three Ukrainian Premier League titles. Read more on Wikipedia

Page views of Bernards by language