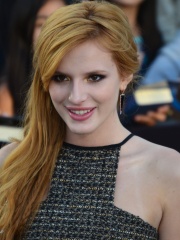 Annabella Avery Thorne (born October 8, 1997) is an American actress, model, singer, and writer. She is the recipient of several accolades, including an Imagen Award, a Shorty Award, a Teen Choice Award and three Young Artist Awards. Thorne first received recognition for her roles as Margaux Darling in the series Dirty Sexy Money (2007–2008) and as Ruthy Spivey in the drama series My Own Worst Enemy (2009), the latter of which earning her a Young Artist Award. Read more on Wikipedia

Among actors, Bella Thorne ranks 3,281 out of 9,996. Before her are Titus Welliver, Luke Wilson, Amanda Peet, Billy Burke, Will Yun Lee, and Jack Albertson. After her are Manfred Krug, Leila Hyams, Meena Kumari, Jim Sturgess, Barry Jackson, and Lesley-Anne Down.