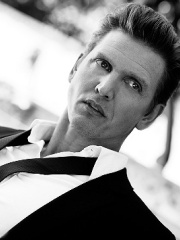 Barry Robert Pepper (born April 4, 1970) is a Canadian-American character actor. He played Private Daniel Jackson in Saving Private Ryan (1998), Corrections Officer Dean Stanton in The Green Mile (1999), Roger Maris in 61* (2001), Sergeant Michael Strank in Flags of Our Fathers (2006), Vince in Maze Runner: The Scorch Trials (2015) and Maze Runner: The Death Cure (2018), and David Keller in Crawl (2019). He has been nominated for three Screen Actors Guild Awards and a Golden Globe Award. For his role as Robert F. Read more on Wikipedia

Since 2007, the English Wikipedia page of Barry Pepper has received more than 2,917,665 page views. His biography is available in 29 different languages on Wikipedia making him the 3,082nd most popular actor.