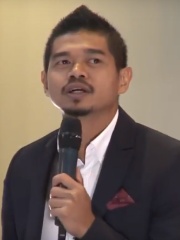 Bambang Pamungkas (born 10 June 1980), also known as Bepe, is a retired Indonesian professional footballer who predominately played for Persija Jakarta and the Indonesia national football team. His natural position is striker. Bambang made his name in South East Asian football when he scored the only goal for Indonesia at the 2002 Tiger Cup semifinal against Malaysia, and was the tournament's top scorer with eight goals.Bambang is considered to be an outstanding header of the ball, and has a reputation for sharpness in the penalty box. Read more on Wikipedia

Among SOCCER PLAYERS In Indonesia

Among soccer players born in Indonesia, Bambang Pamungkas ranks 2. Before him are Beb Bakhuys (1909). After him are Emil Audero (1997).