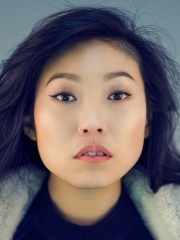 Nora Lum (born June 2, 1988), known professionally as Awkwafina, is an American actress and rapper. She rose to prominence in 2012 when her rap song "My Vag" became popular on YouTube. She then released her debut album, Yellow Ranger (2014), and appeared on the MTV comedy series Girl Code (2014–2015). Read more on Wikipedia

GeekTyrant
Awkwafina Takes Danny DeVito on a Wild Tour of Discord in a Short Film Promo
Discord went ahead and made a short film promo titled Discord - The Movie and it features Awkwafina taking Danny DeVito on a tour of the group chat service that he knows nothing about. It’s explained that the promo is “about what Discord means to us, to you, …
Joey Paur
CinemaBlend
Awkwafina: 12 Things To Watch If You Like The Shang-Chi Star
In case you need a refresher on Awkwafina's movies and TV shows after seeing Shang-Chi and the Legend of the Ten Rings...
Jason Wiese
Celebitchy.com
Awkwafina: ‘Growing up, I knew how I was socioeconomically classified’
Awkwafina covers the September issue of Cosmopolitan to promote her role in Shang-Chi and the Legend of the Ten Rings. She has other projects coming and going, of course, like her Comedy Central show and several upcoming films, but yeah – we’re definitely in …
Kaiser

Page views of Awkwafinas by language