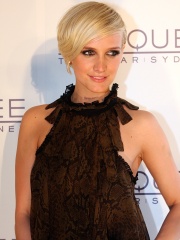 Ashlee Nicolle Ross (née Simpson; born October 3, 1984) is an American singer, songwriter, and actress. The younger sister of singer and actress Jessica Simpson, she began her career as a back-up dancer for her sister and appeared in television commercials at the age of 15. She later pursued a career as an actress and had a recurring role on the family drama 7th Heaven. Read more on Wikipedia

Since 2007, the English Wikipedia page of Ashlee Simpson has received more than 5,547,364 page views. Her biography is available in 45 different languages on Wikipedia making her the 1,902nd most popular singer.

Among singers, Ashlee Simpson ranks 1,912 out of 3,001. Before her are Jake Zyrus, Lena Park, Rokia Traoré, Normani, Jain, and Eva Simons. After her are Mai Charoenpura, Alma, JoJo, Florence Welch, Mark E. Smith, and James Morrison.