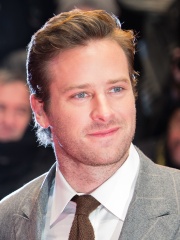 Armand Douglas Hammer (born August 28, 1986) is an American actor. A son of the businessman Michael Armand Hammer and a great-grandson of the oil tycoon Armand Hammer and the singer Baroness Olga von Root, he began his acting career with guest appearances in several television series. Hammer's first leading role was as Billy Graham in the 2008 film Billy: The Early Years, and he gained wider recognition for his portrayal of the twins Cameron and Tyler Winklevoss in David Fincher's biographical drama film The Social Network (2010), for which he won the Toronto Film Critics Association Award for Best Supporting Actor. Hammer portrayed Clyde Tolson in the biopic J. Edgar (2011), played the title character in the western The Lone Ranger (2013), and starred as Illya Kuryakin in the action film The Man from U.N.C.L.E. Read more on Wikipedia