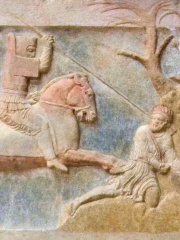 Ariobarzanes (Old Persian: *Aryābr̥zaⁿs; Ancient Greek: Ἀριοβαρζάνης Ariobarzánēs; death: crucified in c. 362 BCE), sometimes known as Ariobarzanes I of Cius, was a Persian Satrap of Phrygia and military commander, leader of an independence revolt, and the first known of the line of rulers of the Greek town of Cius from which were eventually to stem the kings of Pontus in the 3rd century BCE. Ariobarzanes was apparently a cadet member of the Achaemenid dynasty, possibly son of Pharnabazus II, and part of the Pharnacid dynasty which had settled to hold Dascylium of Hellespont in the 470s BCE. Cius is located near Dascylium, and Cius seemingly was a share of family holdings for the branch of Ariobarzanes. Ariobarzanes' one predecessor was a (kinsman) named Mithradates (possibly Mithradates, Satrap of Cappadocia). The archaeologist Walther Judeich claims that Ariobarzanes was that Mithradates' son, but Brian C. Read more on Wikipedia

Page views of Ariobarzanes of Phrygias by language

Among politicians, Ariobarzanes of Phrygia ranks 13,045 out of 15,577. Before him are James of Saint George, Sophia of Holstein-Gottorp, Alfredo Cristiani, Ariarathes I of Cappadocia, Hovik Abrahamyan, and William Livingston. After him are Paweł Adamowicz, Ignacy Potocki, Atticus of Constantinople, Sarduri IV, Princess Marie of Hanover, and Castinus.

Others Deceased in 460 BC