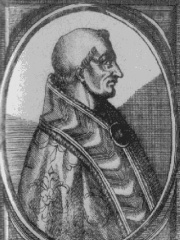 Victor IV (born Octavian or Octavianus: Ottaviano dei Crescenzi Ottaviani di Monticelli) (1095 – 20 April 1164) was elected as a Ghibelline antipope in 1159, following the death of Pope Adrian IV and the election of Alexander III. His election was supported by the Emperor Frederick Barbarossa. Read more on Wikipedia

Since 2007, the English Wikipedia page of Antipope Victor IV has received more than 10,955 page views. His biography is available in 27 different languages on Wikipedia making him the 806th most popular religious figure.

Among religious figures, Antipope Victor IV ranks 808 out of 2,001. Before him are Romanos the Melodist, George Fox, Bavo of Ghent, Fidelis of Sigmaringen, Giuseppe Caspar Mezzofanti, and Nicholas of Flüe. After him are Apollinaris of Laodicea, Ibrahim ibn Muhammad, Rashid Rida, Archduke Rudolf of Austria, Guru Gobind Singh, and Heinrich Bullinger.