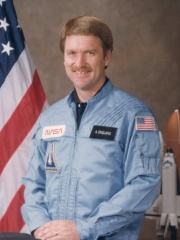 Anthony Wayne England (born May 15, 1942), better known as Tony England, is an American, former NASA astronaut. Selected in 1967, England was among a group of astronauts who served as backups during the Apollo and Skylab programs. Like most others in his class, he flew during the Space Shuttle program, serving as a mission specialist on STS-51F in 1985. Read more on Wikipedia

Among astronauts, Anthony W. England ranks 350 out of 524. Before him are Steven Lindsey, Scott Altman, Anatoli Ivanishin, Carlos I. Noriega, Aleksey Ovchinin, and Millie Hughes-Fulford. After him are Stephen Robinson, Wendy B. Lawrence, James S. Voss, Yuri Shargin, Maurizio Cheli, and Timothy Kopra.